In many applications, data naturally form an n-way tensor with n > 2, rather than a “tidy” table. As mentioned in the beginning of my last blog post, a tensor is essentially a multi-dimensional array:

I introduce both approaches, and in order to demonstrate the usefulness of these concepts, I present a simple data compression example using The World Bank’s World Development Indicators dataset (though I use the version available on Kaggle).

However, before we can get started with the decompositions, we need to look at and understand the k-mode tensor product.

Throughout this post, I will also introduce the R functions from the package rTensor, which can be used to perform all of the presented computations.

The resulting tensor is of size , and contains the elements

It can be hard, at first, to understand what that definition really means, or to visualize it in your mind. I find that it becomes easier once you realize that the k-mode product amounts to multiplying each mode-k fiber of by the matrix .

We can demonstrate that in R:

You might want to play around some more with the function ttm in R to get a better understanding of the k-mode product.

A few important facts about the k-mode product:

The Tucker decomposition (Tucker (1966)) decomposes a tensor into a core tensor multiplied by a matrix along each mode (i.e., transformed via a -mode product for every ):

Note that might be much smaller than the original tensor if we accept an approximation instead of an exact equality.

In case of three-way tensors, we can hold on to the following mental image: 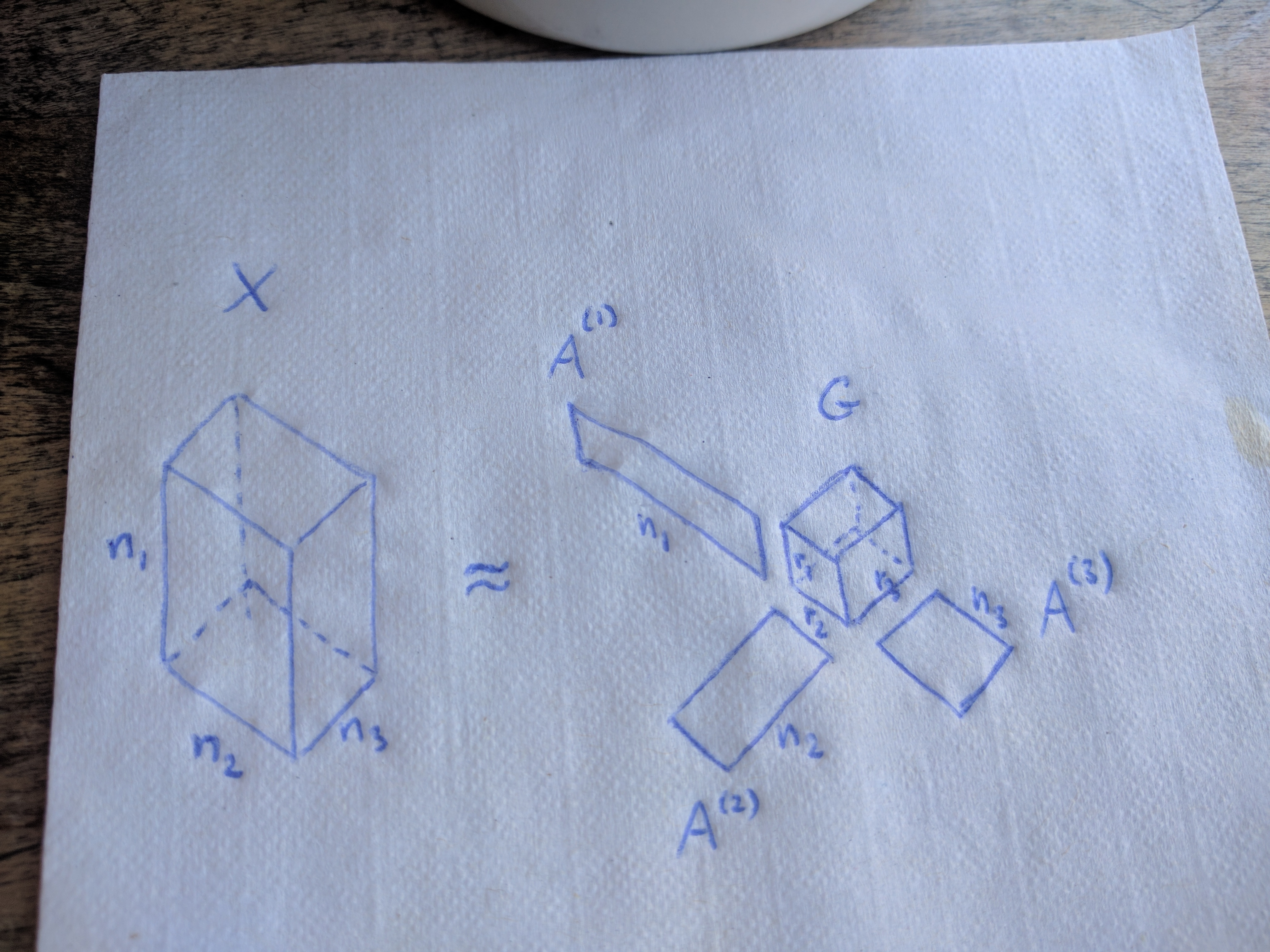 It is interesting to note that the CP decomposition, that I introduced in a previous blog post, is a special case of the Tucker decomposition, where the core tensor is constrained to be superdiagonal.

So, how do you compute the Tucker decomposition?

Many algorithms rely on the following fundamental equivalence:

The above equation uses some notation that was not introduced yet:

A straightforward approach to solve the Tucker decomposition would be to solve each mode- matricized form of the Tucker decomposition (shown in the equivalence above) for . This approach is known as higher order SVD, or HOSVD. It can be regarded as a generalization of the matrix SVD, because the matrices are orthogonal, while the tensor is “ordered” and “all-orthogonal” (see De Lathauwer et. al. (2000) for detail). The resulting algorithm is shown below.

Now hosv_decomp$Z is our matrix , and hosv_decomp$U is a list containing all the matrices . We can use the function ttl, which performs multiple k-mode products on multiple modes successively given a tensor and a list of matrices, to check that up to numerical error the equation is satisfied:

Note that we can also use HOSVD to compress by truncating the matrices . The truncated HOSVD, however, is known to not give the best fit, as measured by the norm of the difference

The higher order orthogonal iteration, or HOOI, algorithm finds the optimal approximation (with respect to the Frobenius norm loss) by, essentially, iterating the alternating truncation and SVD until convergence. If we truncate to have columns, then the HOOI solution can be obtained by the following algorithm.

Application of HOOI to data compression

The example considered below is somewhat silly, given that the tensor I’m compressing isn’t very big, and thus there isn’t much of a point in compressing it. However, I think that the example still shows off very well how the algorithm can be very useful when the data size is much bigger (or the available storage much smaller).

I have downloaded from Kaggle the World Development Indicators dataset, originally collected and published by The World Bank (the original dataset is available here).

The data can be arranged into a three-way tensor with the three modes corresponding to country (list of available countries), indicator (list of available indicators), and year (1960-2014). Since I didn’t have any time to deal with NA values in any creative way, I have kept only three indicators in the dataset. And I have replaced the remaining NAs with a country-wise average value for each particular indicator. Also, I have forgotten to normalize the data

. The preprocessing resulted in a tensor of size 247-countries-by-3-indicators-by-55-years, that looks sort of like this: 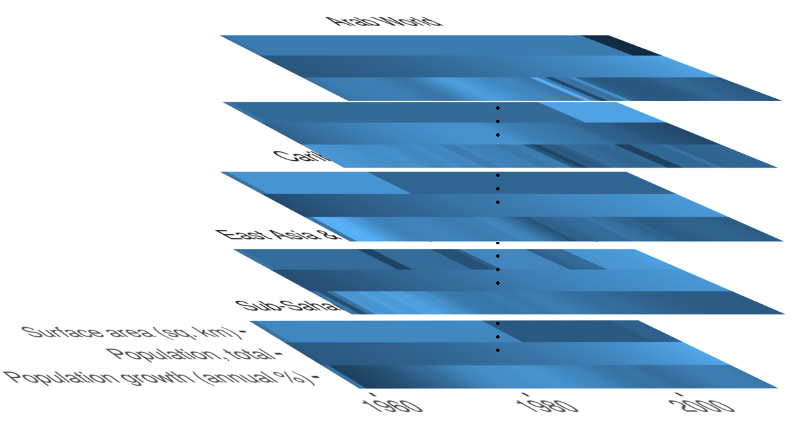 In particular, large stretches of the data within a given country tend to be nearly constant, or nearly piece-wise constant.

We use the function tucker from rTensor to obtain a Tucker decomposition via HOOI, where we set the ranks to the value 3 at each mode.

To see how well the tensor decomposition approximates the original tensor, we can look at the relative error

Even though data compression does not make much sense for the size of the dataset considered here, it clearly shows potential to be very useful for purposes of data distribution and data storage, when the data size far exceeds the terabyte range.