The United States Patent and Trademark office (USPTO) provides immense amounts of data (the data I used are in the form of XML files). After coming across these datasets, I thought that it would be a good idea to explore where and how my areas of interest fall into the intellectual property space; my areas of interest being machine learning (ML), data science, and artificial intelligence (AI).

I started this exploration by downloading the full text data (excluding images) for all patents that were assigned by the USPTO within the year 2017 up to the time of writing (Patent Grant Full Text Data/XML for the year 2017 through the week of Sept 12 from the USPTO Bulk Data Storage System).

First, I curated a patent full text dataset consisting of “machine learning and AI related” patents. I am not just looking for instances where actual machine learning or AI algorithms were patented; I am looking for inventions which are related to ML or AI in any/some capacity. That is, I am interested in patents where machine learning, data mining, predictive modeling, or AI is utilized as a part of the invention in any way whatsoever. The subset of relevant patents was determined by a keyword search as specified by the following definition.

Definition: For the purposes of this blog post, a machine learning or AI related patent is a patent that contains at least one of the keywords “machine learning”, “deep learning”, “neural network”, “artificial intelligence”, “statistical learning”, “data mining”, or “predictive model” in its invention title, description, or claims text (while of course accounting for capitalization, pluralization, etc.).1

With this keyword matching approach a total of 6665 patents have been selected. The bar graph below shows how many times each keyword got matched. 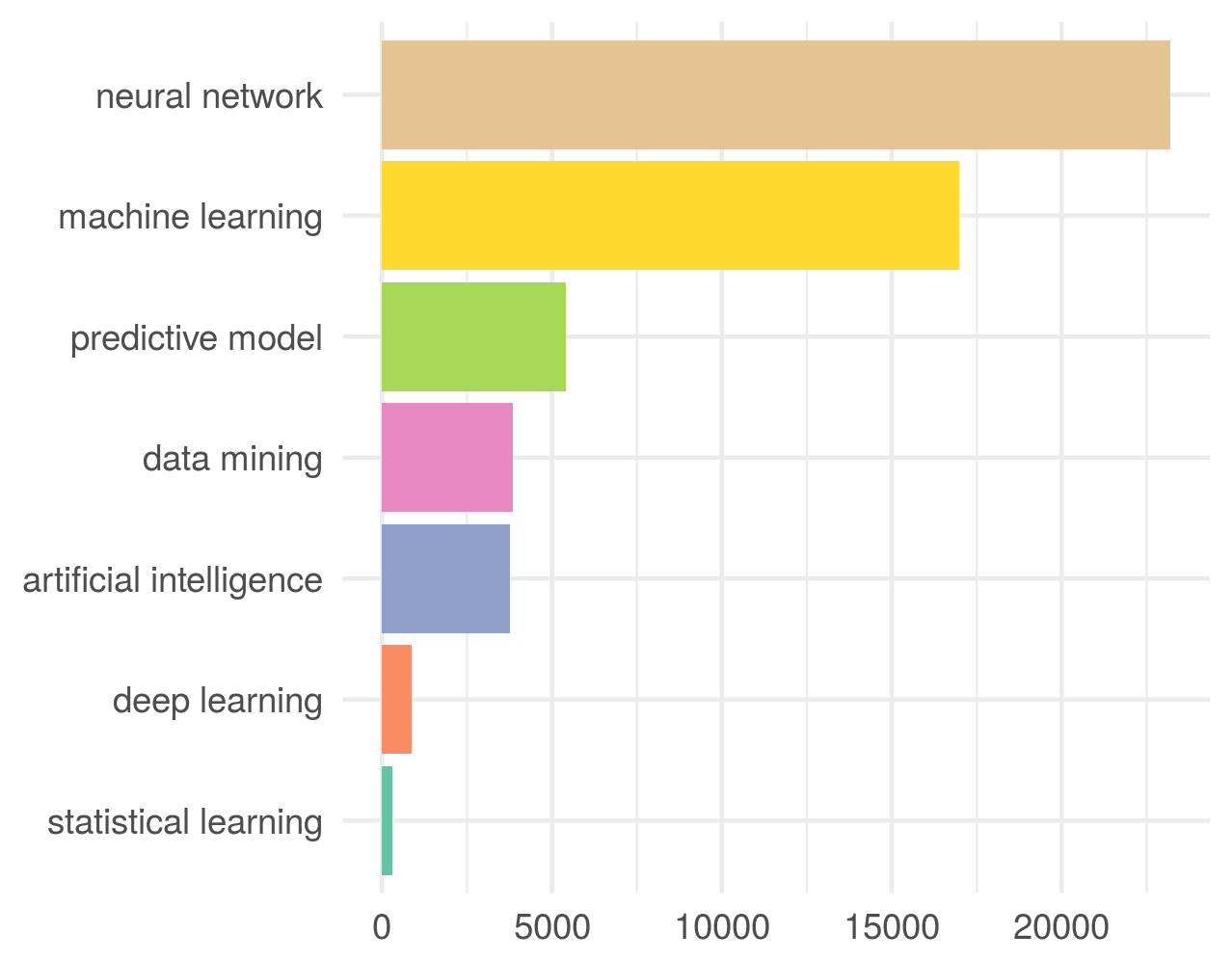 Interestingly the term “neural network” is even more common than the more general terms “machine learning” and “artificial intelligence”.

Here are three (randomly chosen) patents from the resulting dataset. For each printed are the invention title, the patent assignee, as well as one instance of the keyword match within the patent text.

And here are three examples of (randomly picked) patents that contain the relevant keywords directly in their invention title.

Who holds these patents (inventors and assignees)?

The first question I would like to address is who files most of the machine learning and AI related patents. 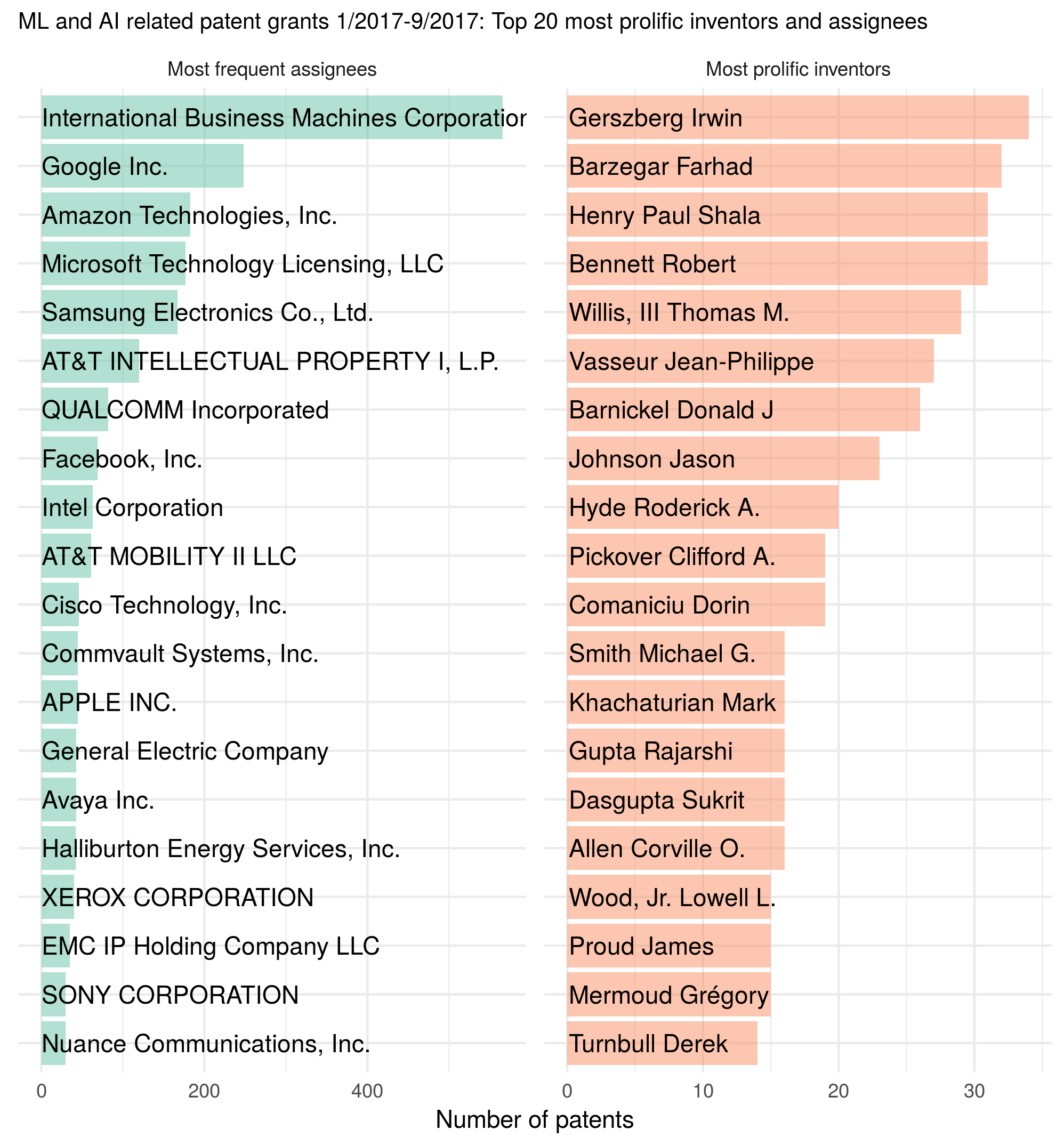 It isn’t surprising to see this list of companies. The likes of IBM, Google, Amazon, Microsoft, Samsung, and AT&T rule the machine learning and AI patent space. I have to admit that I don’t recognize any of the inventors’ names (but it might just be me not being familiar enough with the ML and AI community).

There are a number of interesting follow-up questions which for now I leave unanswered (hard to answer without additional data):

Where do these inventions come from (geographically)?

Even though the examined patents were filed in the US, some of the inventions may have been made outside of the US. In fact, the data includes specific geographic locations for each patent, so I can map in which cities within the US and the world inventors are most active. The following figure is based on where the inventors are from, and shows the most active spots. Each point corresponds to the total number of inventions made at that location (though note that the color axis is a log10 scale, and so is the point size). 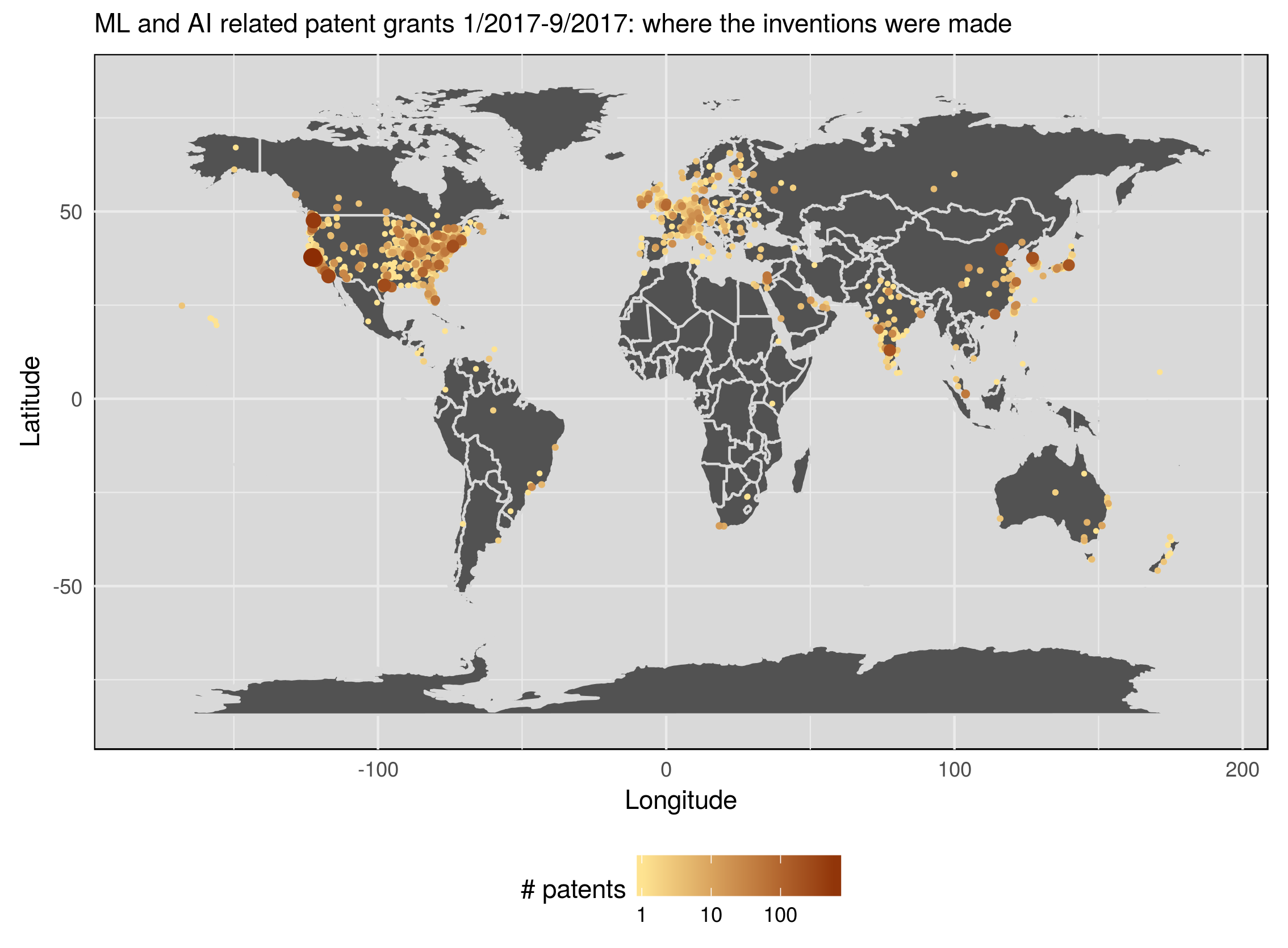 The results aren’t that surprising. However, we see that most (ML and AI related) inventions patented with the USPTO were made in the US. I wonder if inventors in other countries prefer to file patents in their home countries’ patent offices rather the in the US.

Alternatively, we can also map the number of patents per inventors’ origin countries. 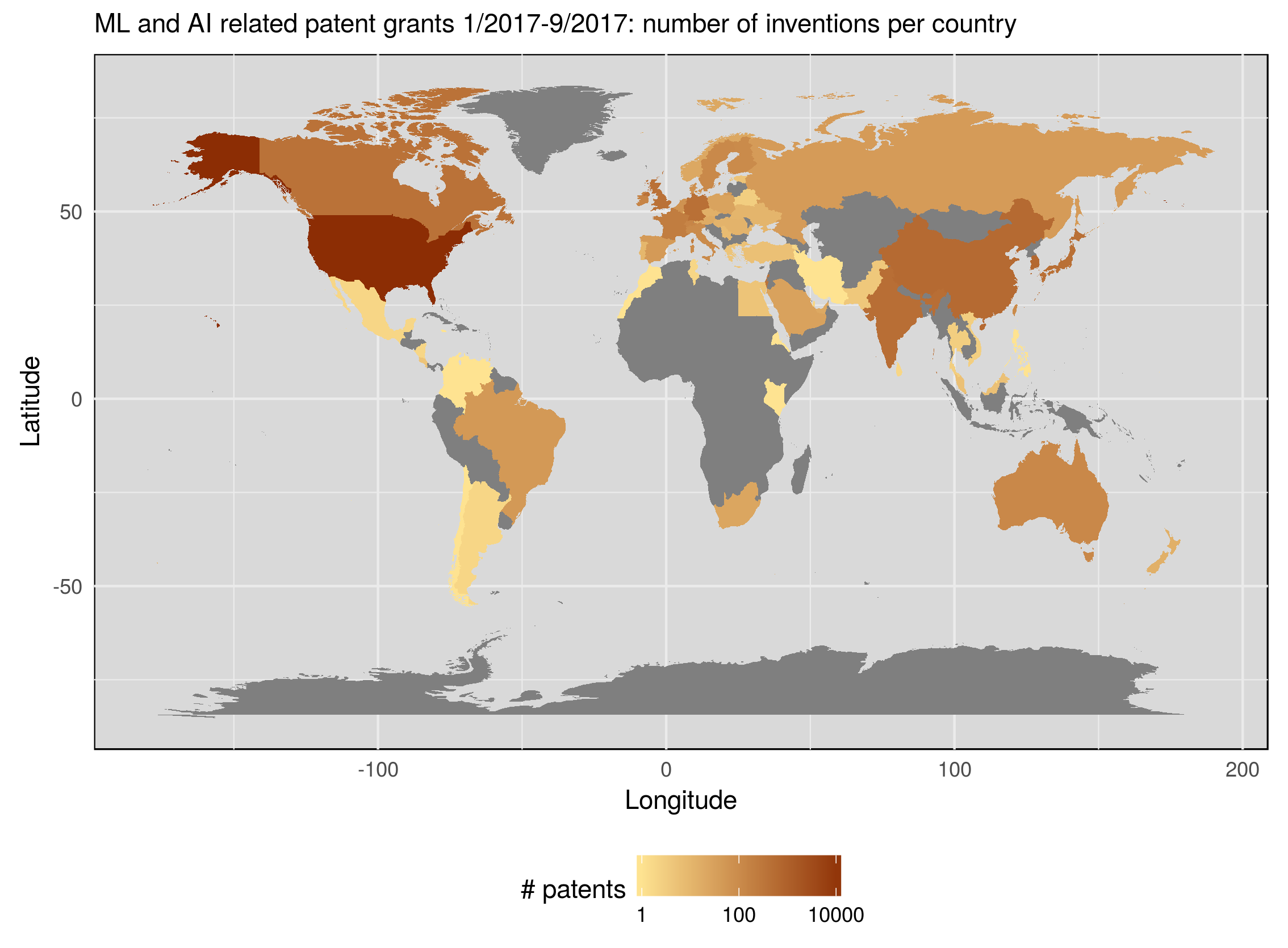 Sadly, there seem to be entire groups of countries (e.g., almost the entire African continent) which seem to be excluded from the USPTO’s patent game, at least with respect to machine learning and AI related inventions. Whether it is a lack of access, infrastructure, education, political treaties or something else is an intriguing question.

Each patent has a date of filing and an assignment date attached to it. Based on the provided dates one can try to address questions such as: When were these patents filed? Is the number of ML and AI related patents increasing over time? How long did it usually take from patent filing to assignment? And so on. 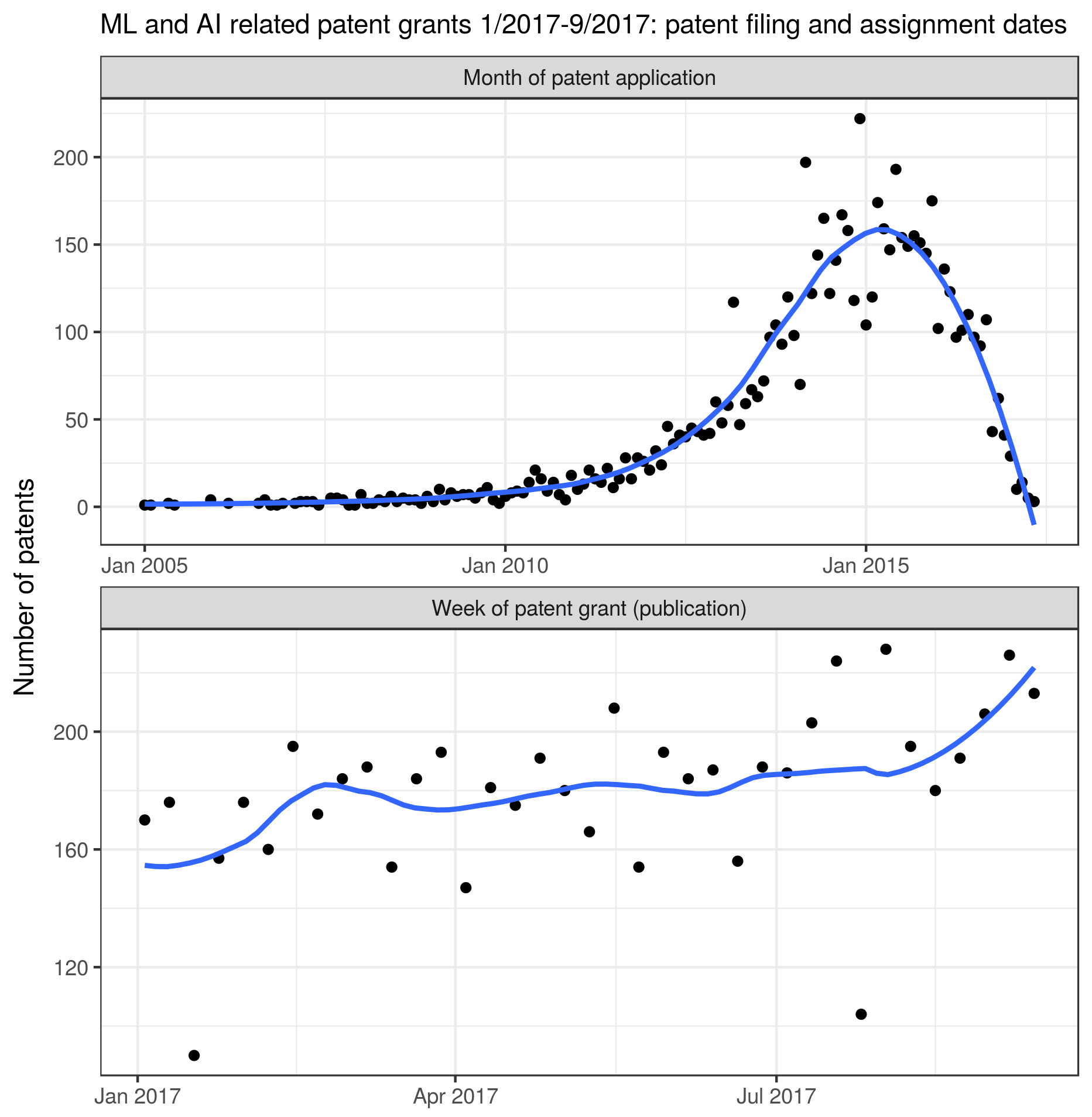 The patent publication dates plot suggests that the number of ML and AI related patents seems to be increasing slightly throughout the year 2017. The patent application dates plot suggests that the patent examination phase for the considered patents takes about 2.5 years. In fact the average time from patent filing to approval is 2.83 years with a standard deviation of 1.72 years in this dataset (that is, among the considered ML and AI related patents in 2017). However, the range is quite extensive spanning 0.24-12.57 years.

The distribution of the duration from patent filing date to approval is depicted by following figure. 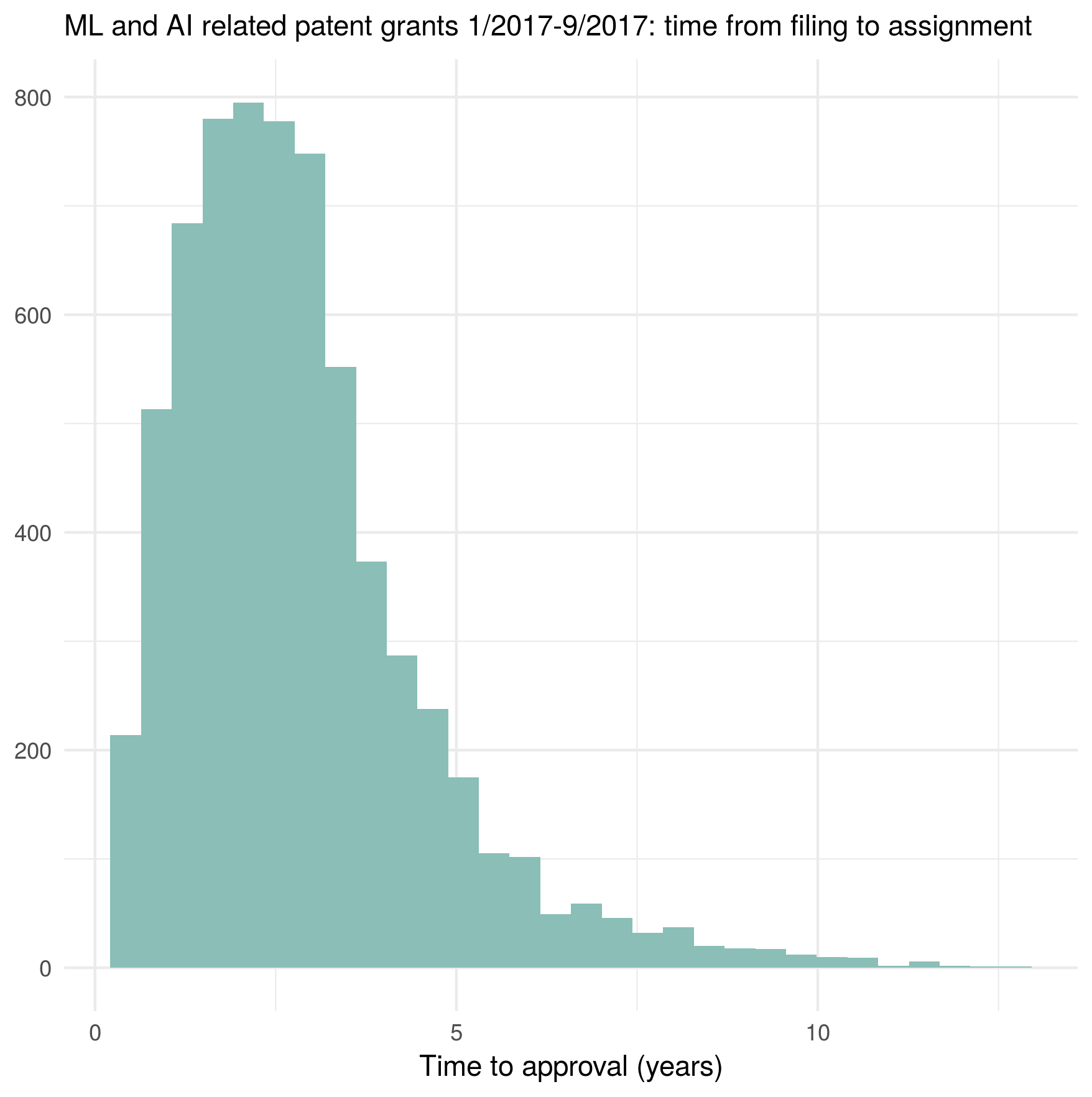 So, what are some of the inventions that took longest to get approved? Here are the five patents with the longest examination periods:

Each of these patents is related to either gaming or biotech. I wonder if that’s a coincidence…

We can also look at the five patents with the shortest approval time:

Interstingly the patent approved in the shortest amount of time among all 6665 analysed (ML and AI related) patents is some smart home thingy from Andy Rubin’s hyped up company Essential.

Do big tech companies get their patents approved faster than other companies (e.g., startups)?

The following figure separates the patent approval times according to the respective assignee company, considering several of the most well known tech giants. 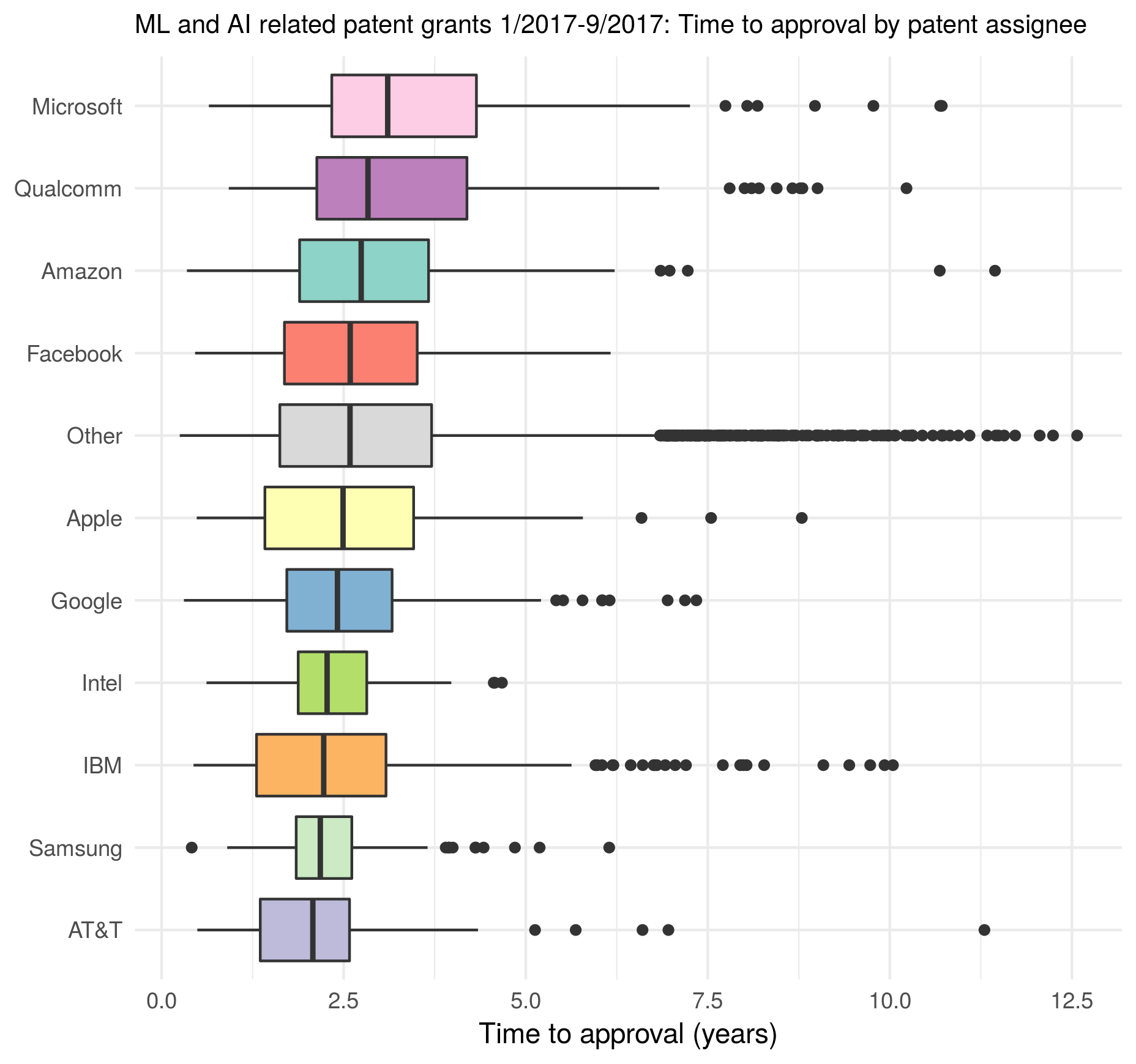 Indeed some big tech companies, such as AT&T or Samsung, manage to push their patent application though the USPTO process much faster than most other companies. However, there are other tech giants, such as Microsoft, which on average take longer to get their patent applications approved than even the companies in category “Other”. Also noteworthy is the fact that big tech companies tend to have fewer outliers regarding the patent examination process duration than companies in the category “Other”.

Of course it would also be interesting to categorize all patent assignees into categories like “Startup”, “Big Tech”, “University”, or “Government”, and compare the typical duration of the patent examination process between such groups. However, it’s not clear to me how to establish such categories without collecting additional data on each patent assignee, which at this point I don’t have time for

There is definitely a lot of promise in the USPTO full text patent data. Here I have barely scratched the surface, and I hope that I will find the time to play around with these data some more. The end goal is, of course, to replace the patent examiner with an AI trained on historical patent data.