). So it took me some time until I learned that the AUC has a nice probabilistic meaning.

AUC is the area under the ROC curve. The ROC curve is the receiver operating characteristic curve. AUC is simply the area between that curve and the x-axis. So, to understand AUC we need to look at the concept of an ROC curve.

Here is some R code for clarification:

A rather ugly ROC curve emerges: 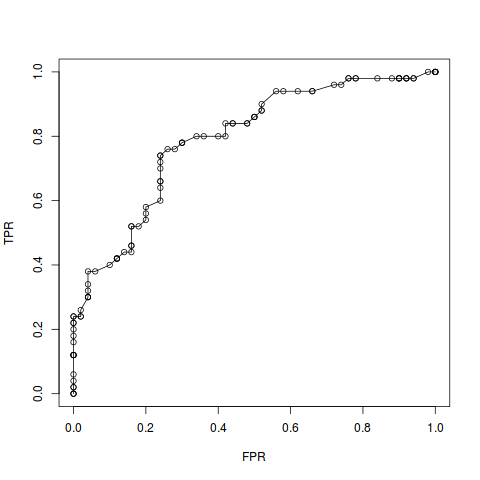 The area under the ROC curve, or AUC, seems like a nice heuristic to evaluate and compare the overall performance of classification models independent of the exact decision threshold chosen. signifies perfect classification accuracy, and is the accuracy of making classification decisions via coin toss (or rather a continuous coin that outputs values in …). Most classification algorithms will result in an AUC in that range. But there’s more to it.

As above, assume that we are looking at a dataset where we want to distinguish data points of type 0 from those of type 1. Consider a classification algorithm that assigns to a random observation a score (or probability) signifying membership in class 1. If the final classification between class 1 and class 0 is determined by a decision threshold , then the true positive rate (a.k.a. sensitivity or recall) can be written as a conditional probability

The ROC curve simply plots against while varying from 0 to 1. Thus, if we view as a function of , the AUC can be rewritten as follows.

where we used the fact that the probability density function

is the derivative with respect to of the cumulative distribution function

An alternative purely geometric proof can be found in the Scatterplot Smoothers blog.

In other words, if the classification algorithm distinguishes “positive” and “negative” examples (e.g., disease status), then

AUC is the probability of correct ranking of a random “positive”-“negative” pair.

The above probabilistic interpretation suggest a simple formula to compute AUC on a finite sample:

Among all “positive”-“negative” pairs in the dataset compute the proportion of those which are ranked correctly by the evaluated classification algorithm.

Here is an inefficient implementation using results from the above logistic regression example:

We can compare this value to the area under the ROC curve computed with the trapezoidal rule.

Trapezoidal rule yields estimated . The difference of can be explained by the fact that we evaluated the ROC curve at only 100 points.

Since there is a minor disagreement, let’s use some standard R package to compute AUC.

Same as the proportion of correctly ranked pairs!

By analysing the probabilistic meaning of AUC, we not only got a practically relevant interpretation of this classification performance metric, but we also obtained a simple formula to estimate the AUC of a trained classification algorithm. Well, it turns out that taking the proportion of correctly ranked “positive”-“negative” pairs as a formula to estimate the AUC is equivalent to the Wilcoxon-Mann-Whitney statistical test. This fact can also be easily demonstrated in a couple lines of R code.

So what? Why care about AUC anyway?

Besides (arguably more importantly), as a measure of classification performance AUC has many advantages compared to other “single number” performance measures: